One of the perks of living in a college town like Oxford, Ohio is that we get people not just from around the country but from all around the world coming here and settling down, whether for a few years or for a lifetime. And with this diverse community comes an array of cultures and experiences that make our little town feel surprisingly big. Organizations like the Oxford Community Arts Center, as well as Miami University departments and clubs, put together engaging cultural events all year long. These events create important opportunities for our town to come together, share, learn, and have fun.

To help you take advantage of these opportunities, we've listed some upcoming cultural events that you won't want to miss.

Professor Capó is a transnational historian whose research interests include modern U.S. history, especially the United States’s relationship to the Caribbean and Latin America. His first book, Welcome to Fairyland: Queer Miami before 1940 (UNC Press, 2017), has received six awards and honors, including the Charles S. Sydnor Award for the best book written on Southern history. He is the recipient of the Audre Lorde Prize from the Committee on Lesbian, Gay, Bisexual & Transgender History and the Carlton C. Qualey Award from the Immigration and Ethnic History Society.

Capó’s research extends to his commitment to public history. He curated “Queer Miami: A History of LGBTQ Communities” for History Miami Museum and participated in a National Park Service initiative to promote and identify historic LGBTQ sites.

Sponsored by the Latin American, Latino/a, and Caribbean Studies and the Office of Institutional Diversity and Inclusion 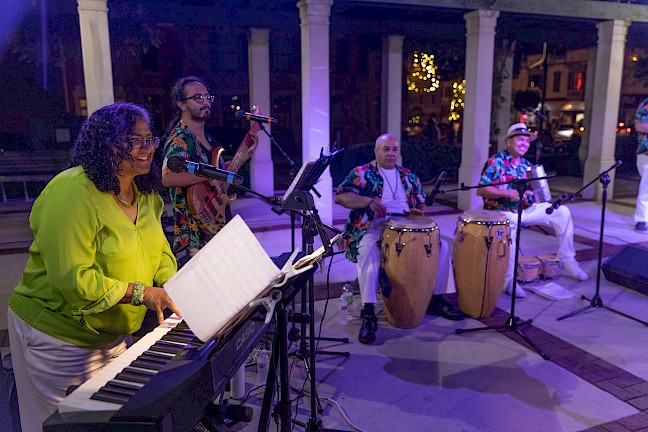 Latin music—from salsa to bachata and reggaeton—has greatly influenced pop music in America, culminating in record-breaking mainstream hits like “Havana” and “Despacito.” But do you know the connection between the various Latin American music and other types of music? We want to celebrate the richness and diversity of Latin American culture by connecting its roots to other music types. Dr. Thomas George Caracas Garcia, ethnomusicologist, guitarist and lutenist at Miami shares about Latin Music and the other forms of music that inform Latin American culture.

Sponsored by the Office of Institutional Diversity and Inclusion

Entertainment at the park will include:

Don't forget to stop by the Information Fair (5:30pm - 7:30pm) where you can pick up literature about work, services, and other events related to the Latin America, Caribbean and Latino communities. This festival is FREE and open to the public. For more information, click here.

Oxtoberfest When: October 8th 1:00pm - 10:00pm Where: Uptown Park 'Tis the seaon of falling leaves, caramel apples, pumpkin carving... and of course BEER! The first annual Oxtober fest will be...

JUNE 10 | JULY 1 | AUGUST 5 | AUGUST 26 We're excited for the 3rd season of Red Brick Fridays, an outdoor experience that allows you to support your favorite Oxford businesses while spreading...